Watts it all about, Alan? 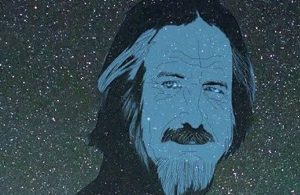 There was a crazy man who said,
“The Cosmos is inside my head!”
When people told him he was mad
He said, “My proofs are ironclad,
For when I’ve had eleven beers
And fall asleep, it disappears!
But when I wake or when I dream
The universe comes back on stream,
Which only goes to show that I,
Like everyone, am God Most High.”
The experts said he was insane,
However, when they scanned his brain
They found, against all expectations,
A dancing swirl of constellations.
His mind contained the total sum
Of all that is and is to come.
The experts gasped, “Perhaps he’s sane!”
And when they took him home again
They found, upon his bookshelf, lots
And lots of books by Alan Watts.