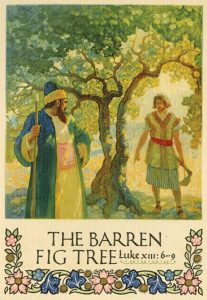 Sitting round the campfire talking,
With the children growing sleepy,
Tales were told and gossip gossiped,
Something juicy, something creepy.

Someone shared a grisly story:
“So I’ve heard…” or, “It appears…”
They relate the gory details
Stoking everybody’s fears.

“Certain people have been murdered,
Killed while worshiping, what’s more!
Blood of lambs and blood of humans
Mingled there upon the floor!”

Now the question all are asking:
Why these men met such a fate?
Was it that their sins were many?
Had their penance come too late?

Jesus was among the party,
Noted for his sense of humour,
Listening to what was spoken,
Knew it was a baseless rumour.

“Do you think the murdered brethren,
Slaughtered there by Roman sword,
Were the very worst of sinners
So to aggravate the Lord?

Did he send old Pontius Pilate,
Heathen governor, from Rome,
In his wrath to kill these people
For their sins and take them home?”

Jesus paused for them to answer,
Some said yes and some said no.
They discussed it for an hour
In the fading fire glow.

Finally he said, “I tell you,
They were not the worst of all.
If we would escape their fate
We’d have to go back to the Fall

And in Eden speak to Adam,
Warn him how the serpent lied.
Since the dawning of creation
Everyone who’s lived has died.

When the tower at Siloam
Fell with eighteen people in it,
What bad sins had they committed
Thus to die in half a minute?

All those unsuspecting people!
Look around you now and see,
We are eighteen souls here gathered –
They were just like you and me.

Death must come to good and evil,
All are equal in God’s eye,
So the ancients might have said
That all who live will surely die.

Death can only touch your body,
You are more than flesh and bone.
When you go to meet your maker
You will know as you are known.

Don’t forget the humble sparrow,
Not one falls but heaven sees.
You’re worth more than many sparrows,
Trust in God and take your ease!

Then he told some cheerful stories,
Turned their frowning into smiles,
One about a vineyard owner
Had them rolling in the aisles.

“There was once a wealthy farmer
Owned a fertile plot of land,
Being fond of wine he thought
A private vineyard would be grand.

While this wealthy, boozy farmer
Knew his donkey from his ox,
Sadly he could not be called
The sharpest chisel in the box.

He was foolish and capricious,
Very fond of grand designs,
Hired a cunning vineyard keeper
Told him where to plant the vines.

So his man begins the labour,
In the blazing sun he digs,
Then the watching boss remembers
He is also fond of figs.

‘Listen here’, the owner orders
‘In the middle of this row
I am going to plant a fig tree,
Then I’m going to watch it grow!’

So he planted there his fig tree
In the middle of the plot.
Did this fig tree bring him pleasure
As the years passed? It did not.

Year by year he came and checked it.
Not a flipping fig he found!
All it did was suck the goodness
From that fertile piece of ground.

All his vines were weak and withered
For the fig tree stole the light.
All his grapes were small and sour
Or infected with the blight.

Finally he told the keeper,
‘Chop it down, it’s far too big.
Three years now I’ve come to check it
Haven’t found a flipping fig!”

But the keeper – sneaky fellow,
Expert in the dodge and shirk,
Didn’t want to chop the tree down
For it saved him lots of work.

So he said, ‘I beg you master,
Spare the tree another year.
I will dig a trench and mulch it.
It shall flourish, have no fear.’

Every year this conversation
Was repeated endlessly
And the vines refused to prosper
Shaded by this barren tree.

That’s the tale I have to tell you.
He that listens, let him hear.
As you know my basic message
Is that love must cast out fear.

Fear grows fast when it is planted
With its all-pervasive root,
Though its branches reach to heaven
It will yield no flipping fruit!”

Do not plant a phantom terror
In the vineyard of your mind;
It will sap life’s joy and sweetness
Leaving bitterness behind.

Do not yield to fruitless worries,
Things that haunt you in the night,
Fight the fright with something hopeful,
Darkness cannot cope with light.

Love your life and live it fully,
Live it till your dying breath.
Do not let your growth be stunted
By the flipping fear of death!