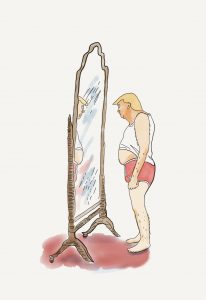 A Trump, however hard he tries,
Grows tubby without exercise.
The President is rather fat,
Which is not to be wondered at.
His only form of weight control
Is hitting balls into a hole.
(He generally seems to shirk
When called upon to fight or work.)

Now tubbiness is just the thing
Which gets a fellow wondering;
And Donald worried lots about
The fact that he was slightly stout.
He thought: ‘If only I were thin!
But how does anyone begin?’
He thought: ‘It really isn’t fair
If all that’s thin on me is hair.’

For many months he prowled about
The Oval Office, looking out,
And envied those who, unlike him,
Were smartly dressed and young and slim.
None of the people he could see
‘Is quite’ (he said) ‘as fat as me!’
Then, with a still more moving sigh,
He added, ‘Or as bald as I!’

A President, like lesser folk,
Must yearly yield to prod and poke;
To test and sample, jab and grope
And icy slap of stethoscope;
In short, to trials of every kind
And even probes up the behind,
But worse by far than all the rest
Is when it’s time to lift the vest.

The day approached, what could he do?
He knew not much, but this he knew:
His boasts of being fit and strong
Had been untruthful all along!
A Trump can bear outrageous things –
Fortune’s arrows, fortune’s slings –
But not some awful press release
Containing that fell word – OBESE!

Outside his office, in the hall,
Lurked lackeys at his beck and call,
Among whose number, so we’re told,
Were certain medics, brave and bold;
And one, who’d always had his back,
Was Doctor Ronny, Son of Jack.
A bolder, braver tar than he
Has never sailed upon the sea.

‘Oh Doctor Ronny, my old friend,
I pray to me your ear you’ll lend!
Before you don that rubber glove
Could we discuss the matter of
My weight and height? For as you see
I am exactly six foot three!
Not six foot two as up to now
Has been announced – I know not how.’

‘There is no need to check my height
Or take my weight, for, out of sight,
I weighed myself an hour ago!
I am a busy man and so
I thought that this would save some time.
Look here: in pounds I’m 239!
Now let’s prepare that press release
Proclaiming: I AM NOT OBESE! ’

So Doctor Ronny, bold and brave,
Took to the podium and gave
A rousing speech affirming that
The President was far from fat.
Indeed that he was slimmer than
A fitter, lighter, slimmer man
Of half his age or thereabouts,
Thus removing any doubts.

A Trump, however hard he tries
Grows tubby without exercise.
The President is rather fat,
Which is not to be wondered at.
But do you think it bothers him
To know that he is far from slim?
Not while he can appoint or buy
A doctor who’s prepared to lie!